El Chorro Gorge - Southern Spain. Just a short drive from the sprawling resorts of the Spanish Costa lies some of Europes most impressive limestone scenery. The Gigante Del Chorro is bizzare and exciting. The crumbling walkway that traverses the sheer walls of this canyon give you the opportunity for a walk on the wildside! If you have a good head for heights that is. 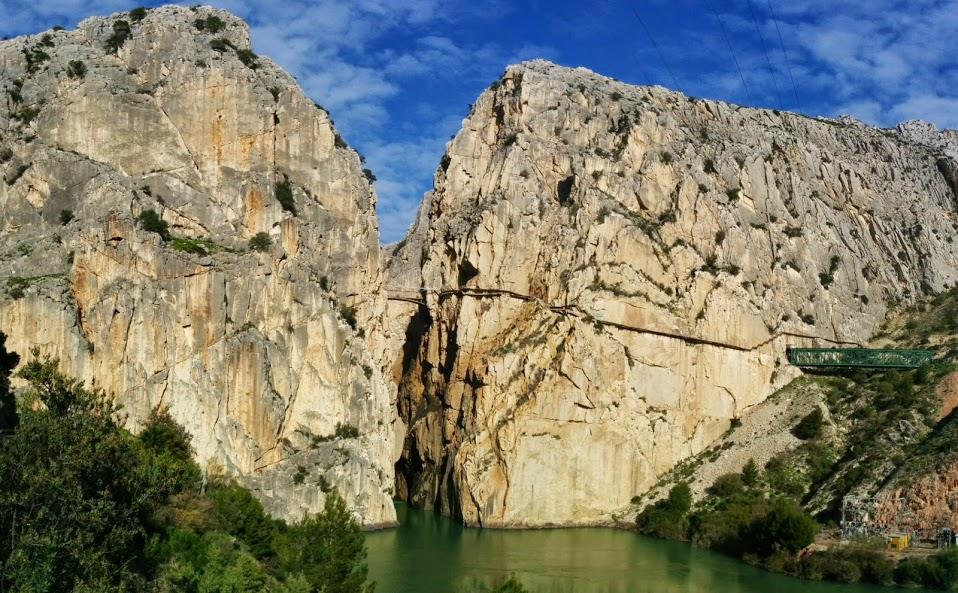 In most countries this would be a major tourist attraction, or ,given the state of disrepair of the walkway, would be out of bounds to the public. The approach to the gorge is either through the railway tunnels from El Chorro station, or along the track down by the lake. Soon however you will come to the first section of the 90 year old "path". It was built around the turn of the Century for the King of Spain. Amazingly he never acually got around to using it! Now holes and even large sections are missing, making it a stomach churning affair.

The first section of the "walk" 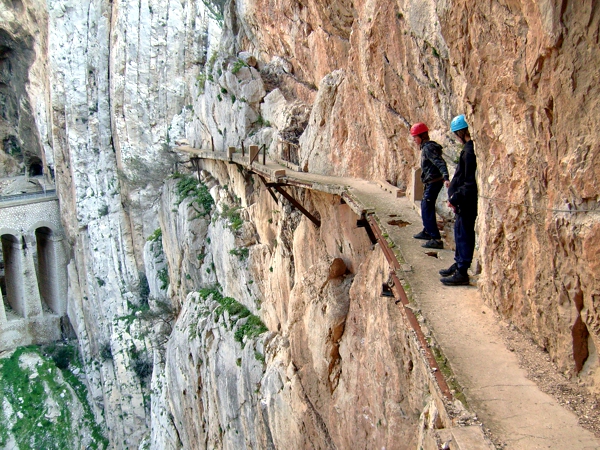 Once along the first section the walkway bends around into the gorge proper.Balancing along a metal bar with hands on the rock wall the view down is one to be avoided! Up some steps and along an easier section the gorge can be crossed via a modern water pipe/bridge. The observant will notice the many bolted routes in this area, harder than they look and with instant exposure, though probably not as dangerous as the walk.

The intrepid (or stupid) can continue along this crumbling structure and follow it right out into the meadows at the other end of the gorge. This allows one to return via the railway tunnels, with their windows looking accross to the walkway, back to the starting point. But get there soon, it won't last forever.

On the popular slabs

A safer alternative to walking at El Chorro is to do some of the many fine bolt routes. The most popular area is the slab in the picture above, approached through the tunnels. Recent access problems have confused the situation here. Camping is not apparently allowed. Though most Spanish people people seem to disregard this. Accomodation is available next to the station , and the area is only an hours drive from Malaga.