The NC500 is widley regarded as one of the top challenges for endurance cyclists in the UK.  In August 2015 adventure cyclist Mark Beaumont established the record for the 516 mile route, completing it in 37 hours and 58 minutes. In June 2016 former pro cyclist and commonwealth games medallist James McCallum lowered that time to 31 hours 23 minutes.

The route runs through the counties of Inverness-shire, Ross and Cromarty, Sutherland and Caithness. Working clockwise, it starts at Inverness and runs via Muir of Ord, Applecross (including the notorious Bealach na Bà), Gairloch, Ullapool, Durness, Thurso, John o'Groats, Wick, Dunrobin Castle, Dingwall then back to Muir of Ord and Inverness.

A 3 day attempt by Tom Phillips

Cycling West from Inverness at 3am on a Friday morning the starlit skies and shimmering lights of Inverness in the Moray Firth bode well for the next 3 days of cycling. After a pretty poor summer the onset of autumn seemed to have started but a settled forecast encouraged me to have an attempt at this 500 mile route around the North of Scotland. I was carrying basic camping kit with me so I could stop and sleep in relative comfort if I needed to. This gave me the flexibility to ride as far as I wanted before stopping. 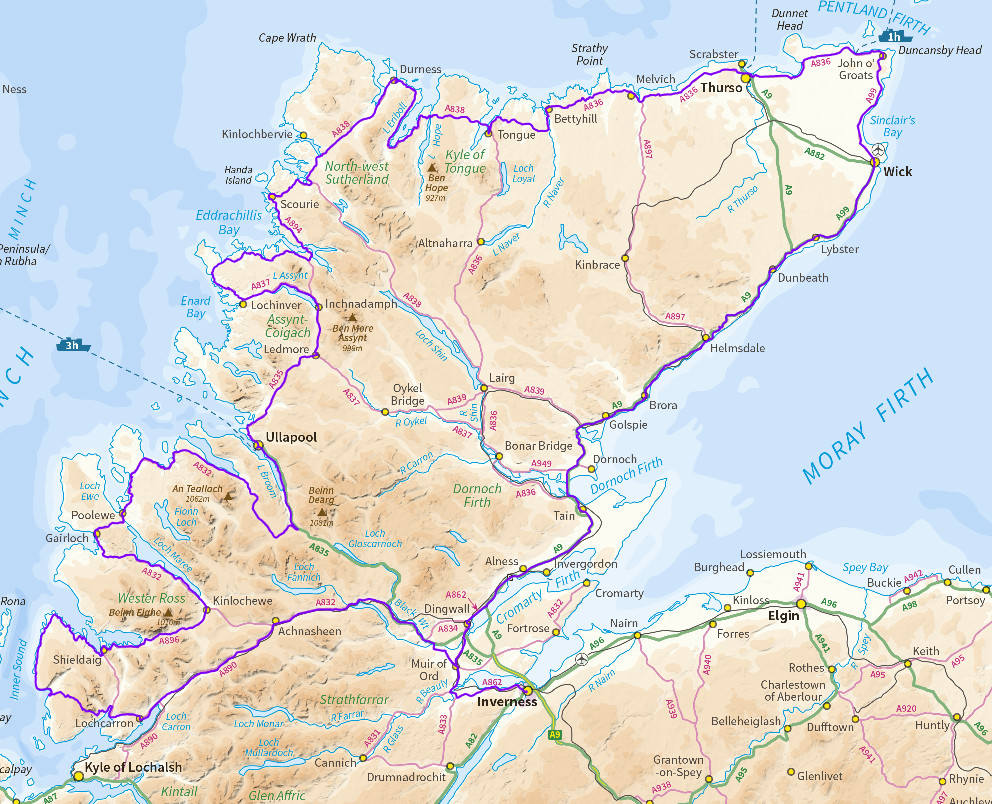 I opted to start from North Kessock as this made my start and finish much easier. Also I was going to make use of the Nigg - Cromarty ferry on my return to avoid the busier roads around Allness and Dingwall. For now though my thoughts were on the journey West towards the big challenge to the Bealach na Bà, this historic mountain pass is engineered similarly to roads through the great mountain passes in the Alps, with very tight hairpin bends that switch back and forth up the hillside and gradients that approach 20%. It boasts the steepest ascent of any road climb in the UK, rising from sea level at Applecross to 626 metres (2,054 ft), and is the third highest road in Scotland.

Heading towards Muir of Ord I encountered many areas of cold fog that had settled into the valleys in the still conditions. My feet and hands were soon numb with the cold. There was no point in stopping though and I knew the ascents after Garve would allow me to escape from the fog. Occasional shooting stars streaked across the sky and I enjoyed the easy terrain and smooth roads on this section, and the miles clicked by with minimal effort. After Achnasheen the descent to the West coast starts, and I rode into warm banks of air which was a welcome relief! Slowly the stars faded and the first hints of what was to be a spectacular sunrise emerged in the East. There were big groups of red deer on the road side  - at one stage galloping alongside me as I sped towards Loch Carron and the mountains of Applecross glowing red in the first rays of the sun.

The sign for the Bealach na Bà leaves you in no doubt as to the challenge ahead. There was a brief flurry of traffic (Applecross rush hour?) on the initial slopes but after that I had the pass to myself. It's never ridiculously steep - but it is relentless!

After a long grind the final joyous hairpin bends are a great reward for the hard work, and suddenly I emerged at the summit and had several miles of freewheeling to look forward to, The first major obstacle was out of the way, but my ride had only really just started. The coast road North of Applecross starts with a nice easy section, but after a while the road ascends and descends continuously over the wild rocky landscape, By the time I reached Shieldaig (100 miles) I was ready for a rest, and some food and drink. The cafe was full with a coach party, so I stopped by the crofters camp spot and made a large pot of coffee and eat some of the food I had prepared to fuel me through the day.

Revived by the coffee I tackled the climb on the road to Torridon and enjoyed the next section to Kinlochewe which has great views of Ben Eighe and the Torridon hills. A stiff breeze had struck up from the East, and although this made the next section along the shores of Loch Maree very easy, I would pay for this later in the day! Approaching Gairloch I chatted to an Aussie cyclist who was doing a few days touring (at a more sensible pace), there were very few cyclist around, but an increasing number of large campervans as I cycled into the afternoon. Compared to cycling in England traffic levels were still very low though.

Stopping again after 150 miles I made a large pot of tea to aid me through what I new was going to be a hard section, but it was much harder than I imagined. The wind from the East had increased to a gale and on the open exposed roads beyond Dundonell my speed was reduced to not much moire than a walking pace. Along with this the left hand cariiageway was covered with diesel and was extremely slippery - I could feel the tyres loosing traction on the hills. 20 miles later I encountered the driver responsble for this, he had eventually run out of fuel, his entire tank now dumped on the road!

I battled on towards Braemore Junction where I knew the final section heading West to Ullapool would mean the wind was behind me. I was really a bit to fatigued to enjoy it and with 194 miles done by the time I coasted into Ullapool I went in earch of food and a place to camp. I was pretty efficient and needed to be as daylight was fading, I got a few items from the supermarket and a good portion of fish and chips from the local takeaway. I opted to cycle towards Airmair and at the top of the big climb I spotted an ideal location by the road next to a campervan. I had a great view over the Summer Isles and also a cup of tea and water from the friendly people in the van.

The wind had dropped to nothing more than a slight breeze as I settled down to a few hours sleep. My alarm was set for 3am and despite sliding off my camping mat and sleeping on the hard ground for most of the night it only felt like minutes when 3am came and it was time to get moving. A large dose of coffee and some yoghurt was my simple breakfast (I was still quite full from the fish and chips). Yet again I was treated to starlit skies and shooting stars  - and even more deer on the road sides (as well as a pine marten and a badger). The undulating roads made it slow going  - as did a slight headwind. I reached Kylesku as dawn approached with far fewer miles completed than at the same time the previous day. The scenery more than made up for this though as the dramatic peaks of NW Sutherland were lit up by the rising sun. 50 miles completed I stopped for a 2nd pot of coffee, a monster bowl of cereal and yoghurt and warmed my feet up in the sunlight.

A tailwind blew my past the Cape Wrath road and towards Durness, but like the previous day I was to have long sessions battling agains the ever increasing wind. The section from Durness to Tongue was busy with campervans, not all of the drivers seemed to be aware of the size of what they were driving - often overtaking and then blocking the road as their vehicles were too wide to pass the oncoming traffic!. For this reason I would avoid this route from Mid June to the end of August.

The fantastc scenery continues to reward you for your efforts on this section. There are many climbs up to about 500 feet, followed by drops back to sea level. These combined with what was now pretty much a continual headwind made it hard going though. I stopped at Melvich to buy more food and again at Thurso where I got my evening meal to cook on my stove and enough milk and yoghurt for breakfast.

The last 20 miles to John o Groats was increasingy arduous as the head wind steadily strengthened to gale force. It was dusk by the time I turned left for the last few metres along the North coast with 365 mile completed in total. I found shelter in a grassy bay between some walls - a fortunate find as when I consulted my phone for the weather update it seemed that weather wise things were going to deteriorate further. The forecast was for 50 mph winds overnight. Then 25mph winds from the SSE all through the following morning then heavy rain from 10am onwards towards inverness. That forecast was pretty hard to deal with in a fatigued state, so I put it out of my mind and got myself sorted, fed and settled down with the alarm set again for 3am.

Things didn't seem to bad when I was again woken from my deep sleep. I was moving again just before 4am and the exposed roads meant 10mph was likely to be my my average speed for a while at least  It was hard going all the way to Wick.but beyond there the wind seemed to swing more to the East and my pace increased. I was rewarded again by another amazing sunrise with "lenticular" clouds that lit up pink like weird flying saucers . My 50 mile coffee stop came at Helmesdale and by now the wind had died down almost to nothing, but that heavy rain was still due - any moment now according tto the BBC foreacast. My pace increased dramatically though on more level terrain - and the rain held off as I took the option to go via the quieter lanes on Cycle Route 1 via Dornoch and then onto the Nigg/Cromarty ferry. This is a really enjyable section and I would certainly reccommend it over the main roads of the official NC500. The small ferry to the Black Isle only runs from April to September, but it is a delight. Once at Cromarty you have a varity of options to get back to Inverness. My route climbed over a very long hill to Fortrose, and with 470 miles cycled I perhaps regreted that choice slightly! That BBC foreacast was ficticious though, I just had a brief spell of light rain and shortly after 3pm I arrived back at North Kessock far ahead of the time I expected earlier in the day.

It had been a succesful trip - a great adventure compressed into just 2 and a half days. I'm sure I'll be bacl to do it again, probably not solo though!